When wearing a black suit, by default, you’ll likely put on a pair of black leather shoes. It’s the standard choice and we can’t blame you for automatically resorting to the monotone suit and shoe combination. However, don’t feel like you’re only limited to black shoes whenever you put on a black suit. For that matter, forget the age-old fashion rule of not pairing black and brown, whether it be black or brown accessories or garments. Now more than ever, fashion and personal style are just that – personal. It’s about how you want to wear, what you want to pair and how you want to express yourself. 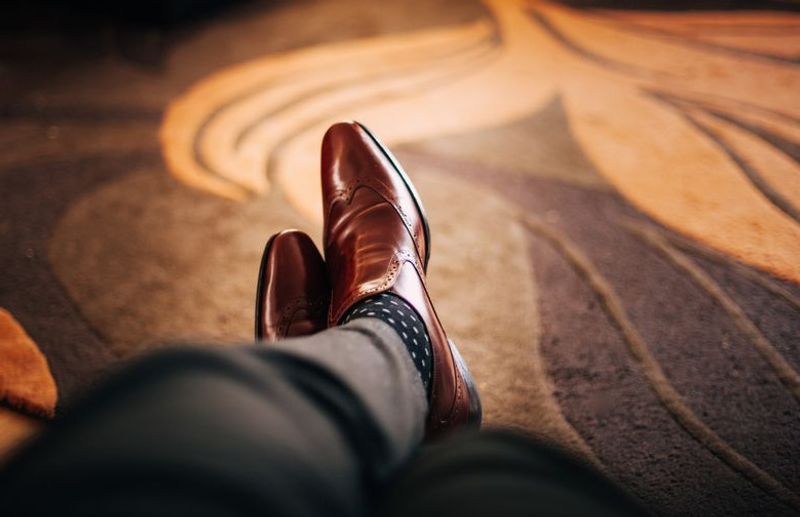 Take a cue from these fashionable leading men who eschew conventional styling rules. Michael B. Jordan updated the usual black one-piece suit and white dress shirt with a black necktie and black leather shoes look. He swapped his black necktie with a reddish-brown necktie and paired it with coordinating brown leather lace-up shoes. It’s a simple yet fresh and updated look.

Ben Affleck and Bradley Cooper took a similar approach to Michael B. Jordan. However, the two leading men chose to wear black three-piece suits instead. They both stepped out on separate occasions looking equally sharp and classic in a black three-piece suit with a plain white dress shirt and dark colored neckties. In Bradley’s case, he wore a chic overcoat with his outfit. However, their choice of shoes made all the difference. Simply updating each of their looks with an unexpected pair of brown leather shoes made them the more fashionable. The gentlemen also illustrate how varying shades of brown shoes can actually work with a black suit.

For a slightly more relaxed look, follow the lead of Chris Pratt. The actor went without a necktie when wearing his black single-breasted suit and trousers. He also wore his white dress shirt with the first few buttons undone. Instead of the more formal derby or oxford shoes, he completed his outfit with a pair of dark brown leather boots. Taking a similar approach is model and influencer Johannes Huebl. The always sharply dressed model took the styling of his black suit ensemble up a notch. He not only paired his black suit and white dress shirt with caramel brown colored leather shoes but he also accessorized with a coordinating light green pocket square, matching brown sunglasses and a brown leather top handle men’s bag. Now, for a true casual take on the black suit and brown shoe combination, take a cue from Chris Hemsworth. The actor nails his fashionable yet relaxed look by wearing a black suit jacket, a plain black t-shirt and black jeans, with dark brown leather boots.

The next time you put on a black suit, don’t just automatically step into a pair of black leather shoes. Step out of the traditionally styling norms – literally. Choose to pair your suit, whether it be single-breasted, double-breasted or a three-piece suit, with an unexpected pair of brown shoes instead.