Steve McQueen is one of the lucky men in this world that has achieved icon status. The American actor was known as ‘The King Of Cool’ and his signature style definitely helped him achieve his nickname. McQueen was one of Hollywood’s original bad boys; a troubled youth that somehow beat the odds and made it big. But no matter how big he made it, McQueen always played by his own rules. And his impeccable dress sense still holds up today, inspiring menswear designers and style aficionados all over the world.

First, you must understand the essence of Steve McQueen. He’s not just any old Hollywood actor. He had a tumultuous childhood spent with various relatives across America. He had to suffer through two abusive stepfathers, which led to him to live on the streets and joining a gang - all while he was a teenager! He served a few years in the Marines before making his acting debut in New York Hollywood. While McQueen was still starting out, he began motorcycle racing as a way to earn extra money. Racing remained one of his passions throughout his whole life, and he often did his own stunts in films. It’s no wonder McQueen had the ability to make everything look incredibly cool!

With his rough background, you’d think McQueen’s go-to might be a leather jacket and blue jeans like the bikers of the 50s and 60s. But it was surprisingly refined: khakis, polo shirts, and 3 piece suits were part of his wardrobe staples. Still, he oozed a certain cool confidence that brought a casual air to all of his ensembles. How exactly can you bring out your inner Steve McQueen?

The 8 keys to having Steve McQueen's style 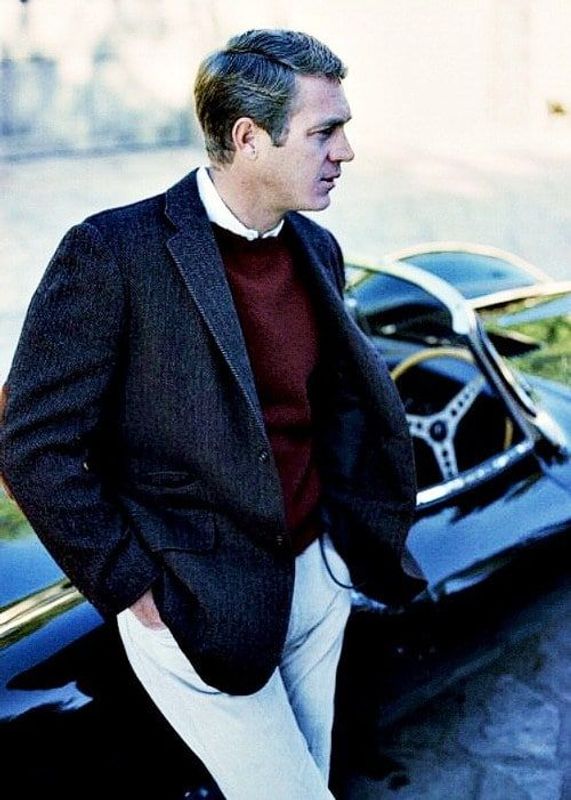 GET A TWEED BLAZER

To embody Steve McQueen, all you have to do is live fast, dress well, and stay true to yourself while doing it. Shop our Steve McQueen-Esque styles below!